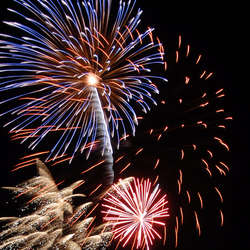 North Beach Atlantic City announced that the entertainment district of Atlantic City will celebrate the official start of summer with a premiere ocean-front firework spectacular to be held on Friday, June 25 at 9:30 p.m.

The firework spectacular, in partnership with Fireworks by Grucci, will be free and open to the public featuring several viewing locations throughout the north end of the boardwalk including: Hard Rock Hotel & Casino Atlantic City, Ocean Casino Resort, Resorts Casino Hotel, Showboat Hotel and Steel Pier. Tennessee Avenue restaurants will have boardwalk activations throughout the evening.