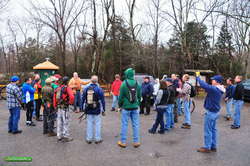 The 800 acre South side of Allaire State Park is maintained by the Allaire Trail Users Group (ATUG) which is a merry band of volunteers that includes mountain bikers, equestrians and hikers dedicated to Allaire's Multi-use trails.

Allaire State Park's trails were scheduled to close on December 1, 1998 due to excessive erosion and neglect of the trail system. On November 4, 1998, ATUG was formed to open a dialog with the park in order to prevent the closing. The group consisted of both cyclists and equestrians and work closely with park officials. Fast forward a few years and the trails are greatly improved and there is no longer a threat of closure.

The park officials have also responded with improvements like 2 lavatories and a resurfaced parking lot. ATUG has shown that it is possible for different user groups to join forces and work toward a common goal, and by working together we have improved communication between the user groups. The result is near zero user conflict and more trail courtesy.

Do not build trails within any park without proper permission from the people that own the park / property. Though state and county parks are "public" land, creating trails without permission is illegal.