Franklin Parker Preserve At A Glance...

This expansive property, New Jersey Conservation Foundation's largest, encompasses 15 square miles in the heart of the New Jersey Pine Barrens. It is accessible by a network of sandy roads that wind though pitch pine forest and blueberry fields, and run along the preserve's cedar swamp, shallow lakes and pristine tributaries of the West Branch of the Wading River.

Four new trails totaling nearly 21 miles were recently cleared and blazed. Some are hikers-only footpaths, while others are multi-use trails that are open to bicyclists and horseback riders as well as hikers. In addition, the 53-mile Batona Trail was rerouted through Franklin Parker Preserve.

A former cranberry farm, the property was purchased by New Jersey Conservation Foundation in December 2003 after the owner decided he wanted it to be protected forever as a nature preserve. NJCF began an ambitious fund-raising campaign and was able to cover most of the property's cost.

In October 2013, a section of restored wetlands was dedicated as the A.R. DeMarco Cranberry Meadows Natural Area in honor of the family whose conservation ethic made the preserve possible.

The property is a rare ecological treasure for the East Coast of the United States, containing some of the most beautiful wetlands in the Pine Barrens and providing critical habitat to more than 50 rare, threatened or endangered species.

Below are a few groups that we have connected to Franklin Parker Preserve. If we are missing any, please let us know 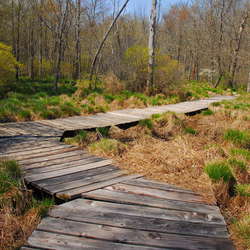