Gingerbread Castle (closed) At A Glance...

Along Gingerbread Castle Road in Hamburg New Jersey, a curious castle rots. Its sun faded, frosted sugar roof, is dwarfed by an ominous silhouette of the shuttered Wheatsworth Mill, towering just above in the background. Giant size gum balls and cupcakes adorn the exterior of the castle and intricate geometric patterns designed to replicate icing and cookie cut-outs ornament the faux gingerbread facade. Inside a stairwell spirals up from the dark dungeon themed basement leading up to a rainbow painted, candy cane enchanted turret. Triangular cut door ways open to cramped rooms where wooden fairy tale figurines gaze up at the peeling paint and smashed stained glass windows of what was once the Gingerbread Castle. Long gone are the lines of children eagerly anticipating an adventure into a mythical land of lollipops and gumdrops. Intrigued onlookers are now met with a barb wire fence and "no trespassing " signs. Humpty Dumpty still precariously balances on his wall, waiting for a gust of wind to blow him to his demise. A stagnant leaf filled pond remains just outside the perimeter of the fence line, where a rotting foot bridge crosses over the murky water to an overgrown path. A faint sign still greets visitors, instructing to wait for the next tour guide.

The Gingerbread Castle in its abandoned condition remains as one of the few surviving fairy tale themed amusement parks. The idea to build such a structure spawned from the mind of Fred Henry Bennett, who as a child was inspired by fairy tales. However the castle itself was designed and built by Austrian architect and designer, Joseph Urban. The castle was completed in 1928 for a cost of $50,000. Throughout the following decades the castle's unique appearance attracted children and adults alike. Tour guides led eager visitors into a Hansel and Gretel inspired world, where mythical ideas were turned into tangible sets. But much like any fairy tale, the Gingerbread Castle's last pages were finally turned in the 1980's. Due to loss of interest the castle fell into disrepair and was only seldom used as a Halloween attraction for a few years. Today the castle remains abandoned. It's interior has been stripped of anything valuable and nature continues to take her toll, battering the exterior, season in and season out. But amongst the faded paint, broken glass, and barb wire fencing, the castle's allure still seems to shine through. On any given day people can be found glancing over the fence, fulfilling their curiosity or perhaps remembering a time when they themselves visited the castle. Supposedly the castle remains in the hands of an owner. However until any real recognition takes place, the castle truly belongs to the curious, adventurous, and daring. The oddity the Gingerbread Castle is, will always attract people for better and for worse. 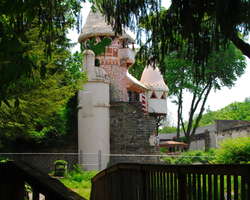 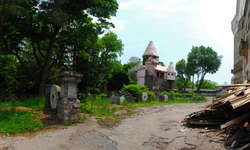 We were camping in northern NJ one weekend when we noticed a sign on the side of the road called the Gingerbread Castle. We hoped for m