Nearly a century and a half old, Renault Winery is a recognized New Jersey State Historical site and one of the oldest continuously operating wineries in the United States. Like a fine varietal, the winery has continued to grow, develop and improve with age. The winery's story begins in Europe, with one man and a tiny, sap-eating insect. Master Vintner Louis Nicholas Renault was a representative of the ancient champagne house of the Duke of Montebello in Rheims, France when Europe was hit by the greatest disaster in the history of wine. The accidental introduction of phylloxera, a parasitic aphid, in the mid 1800s nearly destroyed France's entire wine industry. In 1855, Renault set sail for the new world with hopes of saving his vines and establishing a vineyard free of the insect that had ravished the vines of Western Europe. Renault's first attempt at an American vineyard took place in California. To his dismay, phylloxera also destroyed the root systems of his Californian grapes. It was then that Renault learned of a native American grape that grew on the east coast, a grape with a natural resistance to certain pests and disease.

And so, Renault headed for southern New Jersey, where this miracle grape was rumored to thrive. Finding a climate and soil similar to that which he knew in France, Renault decided to settle and establish his own vineyard. In 1864 he purchased land in the Egg Harbor area, and by 1870 he had introduced his New Jersey Champagne. Renault Winery quickly gained notoriety, winning prizes for its wines and becoming the largest distributor of champagne in the United States. This winery's success even earned Egg Harbor the moniker of "Wine City." 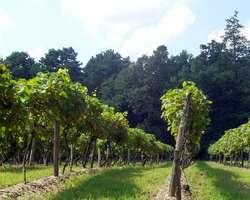 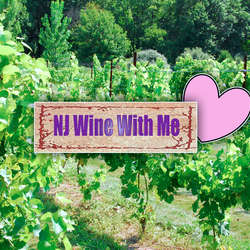 If you're looking for something to do to celebrate Valentine's Day, you have more than a few options over the next 2 weekends! The Gard

Do you have plans to get outside in NJ this Fall? If you're looking for something different to do, November in NJ is packed with great

There are lots of NJ wine events taking place throughout the rest of the Summer, where you can sip some wine and relax in the sunshine.

Break Out of Your Home and Into the Vineyards (NJWineWithMe Post)

After getting pummeled with snow, this winter can't be over soon enough. Despite when the Spring climate actually arrives, the 40+ wine